Yarns of the Soul
An Artist's Journey 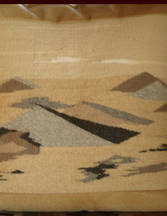 Yarns of the Soul

Published in abQArts, May, 2004 and awarded Best Feature Article for publications of 50,000 by San Francisco Honorary Publications, 2005.

Whether you call it luck, fate or serendipity, most often it’s the unexpected twists and turns of life which shape one’s destiny; the road less traveled suddenly becomes the main highway with the final destination known only to God and the soul.

When I signed up for a class in Navajo weaving, little did I realize either the path I was about to take or the ways in which Navajo weaving would transform me and my life. Until that time I viewed weaving as merely an art medium enabling the weaver to express beauty of design and color. 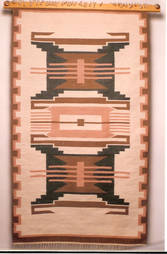 But once I placed that first strand of wool between the strings of the Navajo warp, it was as if some magical force took control and began to shape the patterns. The yarns of the loom became much more than just strings of fibers stacked on top of each other; they became connections of the heart between past and present, between cultures, and between man and the universe. It was no longer just a matter of weaving pattern and color—weaving became an expression of myself and my soul's yearnings.

Working on the Navajo loom put me in touch with just a small part of the wealth of spiritual knowledge known to Native Americans. Each part of the loom and the Navajo weaving process has taught me much about myself, humankind, and the universe. With its two wooden poles aimed skyward, planted firmly in the ground, and crossed by two strong horizontal beams lashed firmly at top and bottom, the Navajo vertical loom reaches toward the heavens. Isn’t this what man has done through the years as he has searched for knowledge? The strings, spun of sheep wool and placed around horizontal sticks, become the warp between which woolen colored yarns are woven in and out to make either traditional designs passed down from generation to generation or contemporary designs that link past and present.

How or why my fascination with Navajo weaving began is unknown to my conscious mind. Maybe it was a "natural" because of my work with cloth starting from the time when I sewed doll clothes at the age of six, or maybe it’s because weaving is an art form that has been with man for hundreds of years and it’s just part of the genes. Or maybe I just analyze too much and shouldn’t seek an answer why buy, but just accept the way it is. Regardless of the reason I feel this passion, Navajo weaving touches a place in my heart where today’s fast-paced technology has been unable to go. Could it be that Spider Woman, mythical teacher of weaving amongst the Navajos, entered my heart and soul. 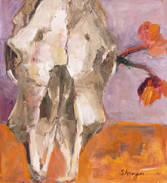 Like a painting taking shape on canvas, the path one will follow through life isn’t always obvious at first. The process begins with a few swipes of oil paint on a canvas. Here and there I add another color. At last, triggered by a subconscious thought or memory, a few blurred images, usually figures, appear. My brush has found the start of the path. Where it will lead is still beyond my conscious comprehension.

My becoming an artist has been a small miracle. It started with a gentle nudge, completely unexpected, in a rose garden. Other nudges followed through the years. It was almost as if a director were producing a play with me as the star. I didn't realize the show had begun, nor did I know that there was such powerful creative energy within me.

As I was growing up, creating and sewing doll clothes was my only connection to a form of art. Neither of my parents loved art or encouraged me in art. It was a world outside their realm, a place that only the elite visited. They were busy struggling for survival and searching for a better life. They had no time for muses or artists.

I attended a country school where wooden desks were bolted to the floor in parallel rows. We were taught to be obedient and color within the lines. Once, on a field trip, we went to the Columbus Museum of Art. I remember little of the visit except the name of a painter, George Bellows. The fact that someone from Columbus could become famous stayed with me over the years. The seeds of an artist were planted in my subconscious on that trip, but it would be many years before they would germinate.

My bachelor’s degree in French did not prepare me to make a living. I returned to Ohio State to pursue certification in elementary education, knowing it would guarantee me a job.

It was a requirement for a class in art methods that took me to the Park of Roses, north of campus. I sat there soaking up sights and smells and decided to do something I had never done before—paint. I put the first swish of color on paper, and the magic began.

That summer day would be my first step down a new path. I found that when I painted, I lost my inhibitions and soared to a new place, exhilarated and deeply satisfied.

But I soon had other priorities: a husband and a teaching job in California. There, I took classes in community art centers where I received encouragement, but it wasn’t until after teaching for 10 years that I considered going back to college to earn a degree in fine arts. My husband’s advice still rings in my ears: “You will never make money being an artist. Do it for fun. Get an advanced degree and teach at a university.

Instead of the longed-for arts degree, I earned a Ph.D. in education to train teachers of the learning disabled.

Then, on a whim, after several years of teaching in a state university and doing diagnostic work with deaf and multiply handicapped infants, children, and youth, I quit my profession.

I roamed through 18 more years on a circuitous route: working in a multi-national corporation, managing a nonprofit school-to-work corporation for disabled teens, taking temporary assignments. I returned to my childhood love of the fiber arts and starting designing and weaving silk-screened garments and pillows, rugs, and baskets.

One day a serendipitous trip took me to the southwestern mecca of Taos, N.M., where I once again reveled in art. I looked at it, talked about it, read about it, wrote about it, and finally put paint on canvas once again. This time the paint stuck.
I was committed to being an artist.

I now paint and write in Taos and around the world. My journey continues, and my road stretches as far as I can see. And I can say, “I am an artist.


Shroyer exhibits her works in national and international shows and at galleries in Florida, Nevada, and New Mexico, including the Open Space Gallery in Taos. Visit her online at www.charlotteshroyer.com