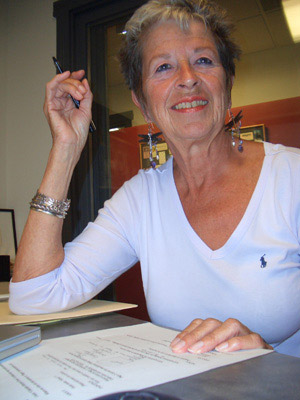 Several years ago Charlotte “Charlee Shroyer listened to the “music of her soul, left a 20-year career as a teacher and college professor, and started on the path which would eventually lead her to the fine art community of Taos, New Mexico. Forty years before her Taos arrival, Shroyer painted for the first time as part of a project required for elementary education certification. The exhilaration of this experience and the positive feedback that accompanied it encouraged her to pursue art classes in southern California and Berkeley, California, but it was not until a chance encounter that she began pursuit of art as a career. Shroyer’s artistic path to Taos has included twenty years as a weaver of Navajo style woven pillows and rugs as well as ethnic baskets.

Her textile work was juried into prestigious American Craft Council shows in Chicago and Columbus. It was a serendipitous move to Taos and her experience there as writer and editor for a small art publication that rekindled her love affair with fine art.

Shroyer has received numerous national and international awards for her figurative oils and monotypes. The American Juried Art Salon comprised of museum curators and directors named her as one of its 2013 Emerging Artists. Other awards include First Place, 2011 Top Ten International Women in the Arts, Rome, Italy; Awards of Merit including 2013 Small Works, Manhattan Arts International; 2013 Richeson International Award of Merit for portraiture. Her work has recently been selected for the 86th Annual International Juried Exhibition, May 16- June 19, 2014, Harrisburg, PA. Exhibited and collected nationally and internationally, Shroyer has exhibited in New York City, Hong Kong, Naples, Florida, and more. Colleagues and art patrons describe her art as “full of energy, “coming from a place deep within-a place of her own vision, with a style reminiscent of DeKooning and the Mexican artist Tamayo“I am inspired by the world—its people, archaeology, cultures, and by favorite authors (Pamuk, Durrell, Pynchon, Llosa, etc.) while exploring duality of personality through color, line, and form as the vehicle for my contemporary figurative images of the faceShroyer also continues to write. Her essay entitled “Yarns of the Soul and published in abqARTS was awarded the Best Feature Award in the San Francisco Honorary Publications competition for newspapers with circulation 50,000 and under. 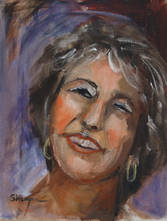 2013 Selection as a 2013 Emerging Artist by the American Juried Art Salon comprised of museum curators and directors.

2005 Best Feature Article, San Francisco Honorary Publication for newspapers with circulations of 50,000 and under

2012 As We See Ourselves, Encore Gallery, Taos, New Mexico

2011 Into the Night, Whitaker Arts and Science Center, Harrisburg, Pennsylvania